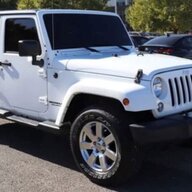 I have researched my issue on multiple forums and each time I feel like I have found the same issue as I am seeing, I find out its on a YJ or TJ unit. Please forgive me if I missed some threads on the issue I am seeing, but I tried all the research I could before bringing it to a broader group. I would appreciate any time and consideration folks on this forum can provide.

I recently purchased a 2015 Wrangler Unlimited Sahara in really great shape. The jeep has no modifications. Its still as it rolled off the production line. The only flaw is the led's on the circuit board for the instrument panel do not illuminate As for the cluster face, the needles still glow orange, the message center displays, etc leaving only the issue of the instrument panel led not lighting . The multifunction switch is operational. When rotating the switch the radio as well as the digital readouts get brighter/dimmer. I have checked every fuse in the box just to be on the safe side as well. Last evening I pulled the cluster and broke it down to the printed circuit board. Once out I noticed an area that appeared to have dust on it, but noticed a chip on the board that appeared to be damaged as well. The part number I found on the back of the cluster assembly is 56054394AF, but I hate to buy a new cluster without knowing what caused the current issue. However, I am fairly confident the issue is with the board itself and not due to an electrical wire as I have found no other issues.

Some additional information of the jeeps history: Using Carfax I have found the jeep originated in Canada before coming to the states in 2018. Researching the issue I found some videos speaking specifically about instrument cluster conversions and potential issues that could arise due to those conversions (mostly cosmetic issues such as broken clips, damaged faces, etc). It appears the cluster in my Jeep definitely underwent the cluster conversion as I found a sticker on the back of the instrument panel listing the VIN, a barcode, date of 2/7/18 @ 8:55AM and showing it was performed at Lanoue Chevrolet Jeep Wrangler in Niagara Falls, NY. I am not sure if the issue with the board was already present on the cluster installed prior to coming into the states or if the issue occurred after.

I want to get this issue corrected so the Jeep is restored to its proper working order as designed and with the correct mileage.

Here are my questions:
1. Anyone else had the same issue of the led's on the instrument cluster not being operational? Or non operational following the Canada to US conversion?

2. If I purchase a new/used instrument cluster, will I need to have a dealership program it for the correct mileage or will it auto update from the PCM (I am not sure where the mileage is stored).

3. Are there any concerns/issues I should worry about if I were to install an used or new cluster (i.e. the jeeps programming picking up that the new cluster isn't original, options not matching, etc).

4. If I were to go with a CaRobotor J Pro unit, how does the CaRobotor get the mileage update?

5. Any other ideas, thoughts, guidance, etc is much appreciated.

Again, Thank you for your time and consideration helping this ole southern boy cure what ails him.

Thank you for the in depth information and pictures.

JKs have a built in dash panel self test. I'll link a video to show the procedure it's super simple.

My first question is does the dimming function works for the interior lights? I agree that the CPU there looks a bit rough and the dirty board implies scrapyard.

Test the dimming, run the diagnostic test and get back with us.

MacGuyver said:
Thank you for the in depth information and pictures.

JKs have a built in dash panel self test. I'll link a video to show the procedure it's super simple.

My first question is does the dimming function works for the interior lights? I agree that the CPU there looks a bit rough and the dirty board implies scrapyard.

Test the dimming, run the diagnostic test and get back with us.

Thanks for the reply. I have performed the self test and all functions well with no residual alarms. The dimming function on the multifunction switch works as designed as well. When dimming you can see the digital read out on the odometer as well as the radio dim or get brighter. It will also turn on the interior lights. I have jostled the switch looking for any signs of a short, but been unable to find any indication it isn't working.
Reactions: mrjp
Share:
Facebook Twitter Reddit Pinterest Tumblr WhatsApp Email Share Link