Why is My Jeep Wrangler JK Overheating? 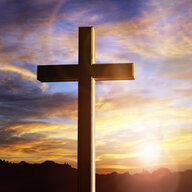 An overheating engine should not be taken lightly. Abnormal coolant temperatures indicate a fault in the cooling system that should be inspected as soon as possible. An engine that is allowed to overheat can quickly damage vital engine components and become a costly affair.

A fully functioning cooling system is of utmost importance to maintaining reliable engine operation. Today's engines need to operate within a relatively constant temperature range in order to meet emission standards and deliver high levels of performance with minimal fuel consumption. When a component in the cooling system acts up or fails, adequate heat energy cannot be absorbed from the engine and allowed to dissipate as intended. Not only can this reduce performance and increase emissions, it also can cause significant engine damage if the engine is allowed to overheat. In order to conquer the toughest of terrains in your JK Jeep Wrangler, you want to ensure your cooling system is operating at its maximum efficiency. This article will outline several components that can lead to engine overheating in the Jeep Wrangler JK.

Materials Needed
Step 1 – Check coolant
In order for the cooling system to properly operate, there has to be a sufficient amount of coolant in the system. Coolant circulates throughout the engine and absorbs engine heat via heat transfer. The warm coolant passes through the engine and eventually makes its way through the radiator where it is cooled before being sent back into the engine. Surprisingly, many owners fail to regularly check their coolant level and, as a result, may experience engine overheating. While a low coolant level may be an indication of a larger problem in the cooling system, a lack of coolant circulating the system cannot adequately absorb the heat produced by the combustion process and can quickly lead to engine damage.

With the engine cool to the touch, remove the radiator cap and inspect the coolant level. Fill the radiator until full and top off the coolant recovery bottle (aka coolant overflow tank) to at least the minimum fill line. The radiator and recovery tank can be topped off with distilled water; however, a 50/50 coolant mix should be used if a relatively large amount of coolant needs to be added. 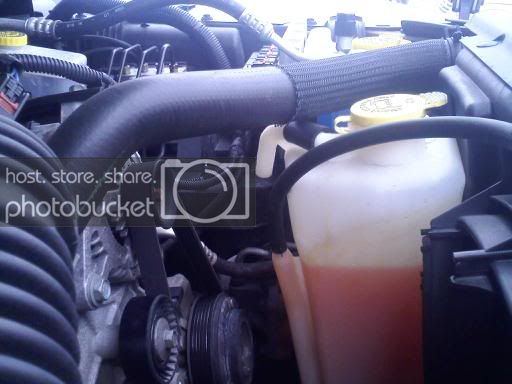 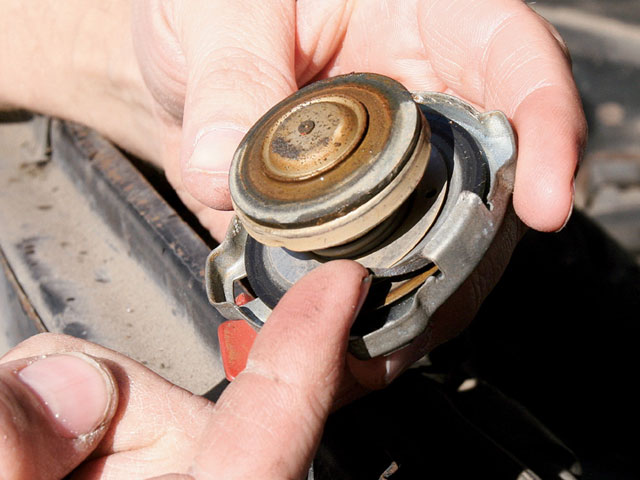 It is also worthwhile to inspect the general condition of the coolant. Although the Wrangler is still a fairly new model filled with long-life coolant, the cooling system may have become contaminated with the wrong coolant and can be the source of an overheating issue. Chrysler switched their coolant formula in 2013 from their traditional HOAT coolant to a new OAT brew. These coolants are not compatible with one another, and mixing of the two can lead to crystallization and subsequent overheating. Many individuals and service departments alike have accidentally mixed these coolants, so inspect the coolant and flush the system if necessary.

Step 2 – Check radiator and fan
The efficiency of the radiator and electric cooling fan can be greatly reduced by mud, dirt and debris and also lead to engine overheating. JKs that see any kind of off-road duty can easily ingest mud, dirt, and water through the front grille. The cooling fan, fan shroud, and radiator can become packed full of muck and not only reduce cooling system efficiency, but also cause the fan motor to bind-up and quickly fail. The electrical fan on all JK models has been known to be quite fragile and is regularly the cause behind cooling system issues. Clean the radiator and electric fan as necessary. If the fan does not operate, or works only intermittently, refer to the related article below for fan diagnosis. 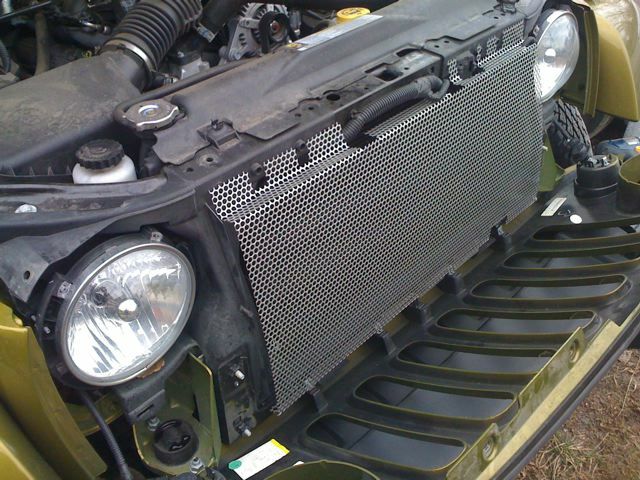 Pro Tip
If your Jeep keeps cool at cruising speeds, but only seems to overheat in traffic or while idling, the cooling fan is likely the culprit. At speed, enough air passes through the radiator to keep the engine cool without the need of the fan. When coolant temperatures rise while moving slowly or sitting still, a functioning fan should turn on and pull air through the radiator to regulate coolant temperature. 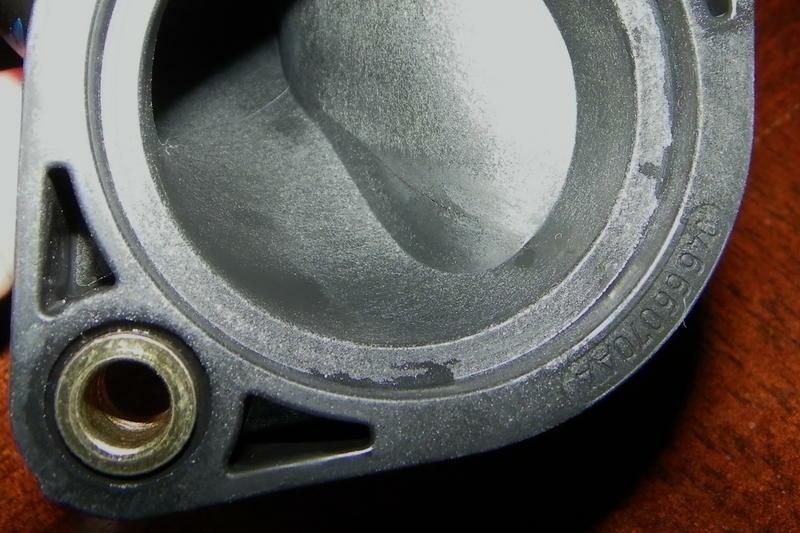 Pro Tip
Feeling the temperature of the top radiator hose after the engine has been running several minutes can provide a good indication of the thermostat's condition. A cold hose can suggest a stuck thermostat and lack of coolant flow, whereas a warm hose will indicate that the thermostat has opened and is allowing coolant to circulate the system.

Step 4 – Check the water pump
The water pump's sole responsibility is to circulate coolant throughout the cooling system. While a water pump does not usually flat out fail without first giving notice, it may not operate as efficiently as it should and allow engine temperatures to rise. When the seal in the water pump fails, coolant will begin to leak out the weep hole to prevent contamination of the water pump bearing. A weeping water pump can cause coolant to drop to unsafe levels and allow the engine to overheat. If left untreated, the bearing will eventually fail and cause complete water pump failure. Also, many modern water pumps are now using composite impellars blades which have been known to break and reduce the amount of coolant the pump can flow. While a damaged impellar will not typically make any noise, it can allow for increased coolant temperatures and, in severe cases, overheating.

Pro Tip
A failing water pump will often be accompanied by a moaning or growling noise that increases with engine speed. The serpentine belt can be removed and the water pump pulley spun by hand to check its condition. If the pulley does not spin free or has excessive shaft play, the pump should be replaced. 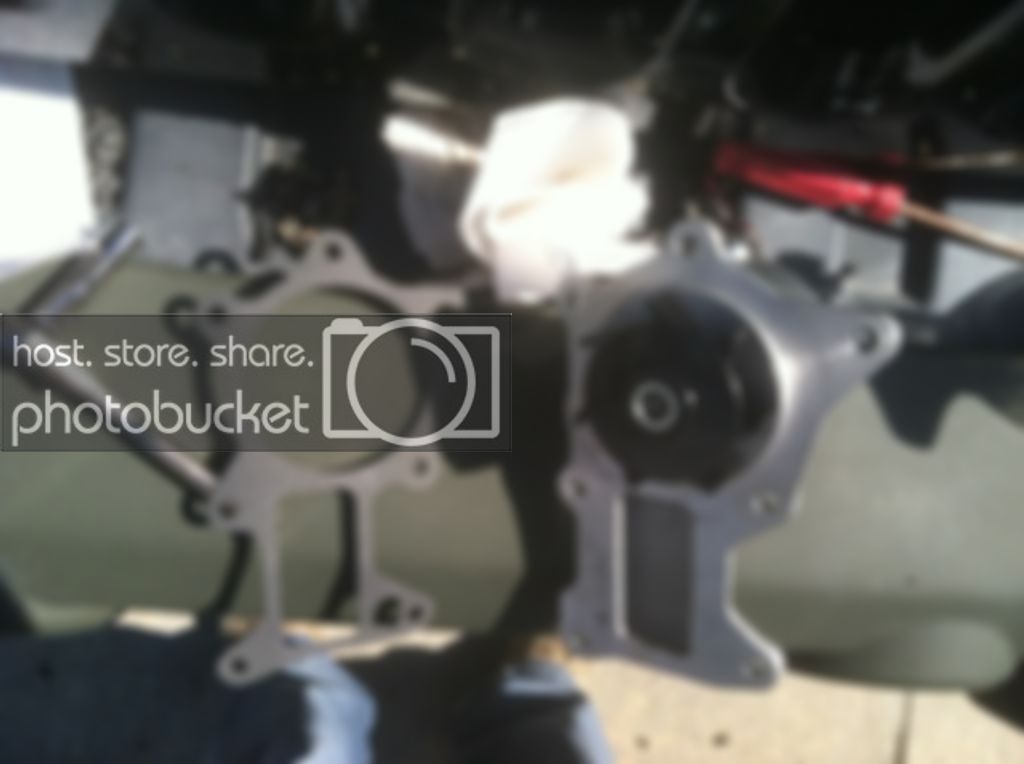 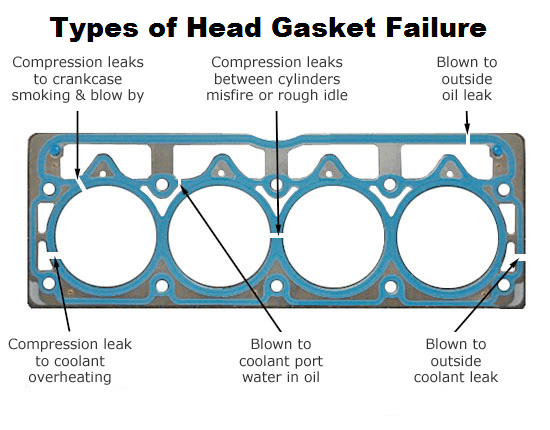